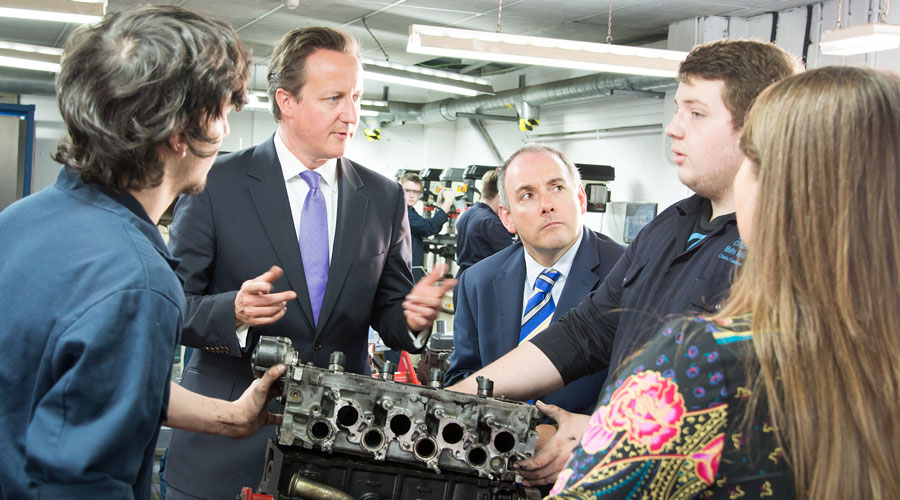 While visiting the Automotive Engineering department the Prime Minister spoke at length to students and apprentices – including former Apprentice of the Year Elliot Shakeshaft – about apprenticeships and employment opportunities and their hopes for the future.

NCTJ Journalism students Amina Ahmed and Elliot Mees hit the jackpot when they got the opportunity to grill the Prime Minister about current political issues. They doggedly pursued the topics they were interested in and made sure they got answers to the questions they had prepared.

Level 3 Media & Journalism students Ricky Thompson and Craig Fantham were invited to cover the event and they got an exciting insight into the challenges of working in a press pack! They acquitted themselves magnificently amidst the flying elbows and secured some great shots (to be published soon).

David Cameron said of his visit:

"I think it's been really inspiring. The College is obviously at the cutting edge of providing the range of things that you need in terms of 16-18 year olds, A Levels, technical courses, apprentices, retraining unemployed adults, and I got a real sense of enthusiasm from those running the College for the work they do.

"I think one of the problems in the past was sometimes colleges could be a bit remote from the needs of the real economy and what we see here is businesses feeling that Harlow College is open to them, that they can come here, find apprentices or design courses. It feels really linked up – what Harlow College is doing and the needs of businesses seem absolutely combined."

“It was a brilliant opportunity for Harlow College students to showcase their skills in Journalism, Photography, Hospitality and Automotive Engineering. We passionately believe that people of all ages should be engaged in the world around them and be active citizens – if his visit inspires more people to engage in the political process, no matter their political persuasion, then that has to be a positive thing.”

"The Prime Minister's visit to Harlow College and the new UTC was a proud day both for the staff and students and for Harlow.

"I asked David Cameron to come to show him the incredible work of the College and of the UTC. For the PM to meet some outstanding apprentices and to see the new UTC building, which has ten million pounds investment from the Government and will educate hundreds of 14 - 19 year olds, was really important.

"I congratulate the staff and students for showcasing the best of Harlow."