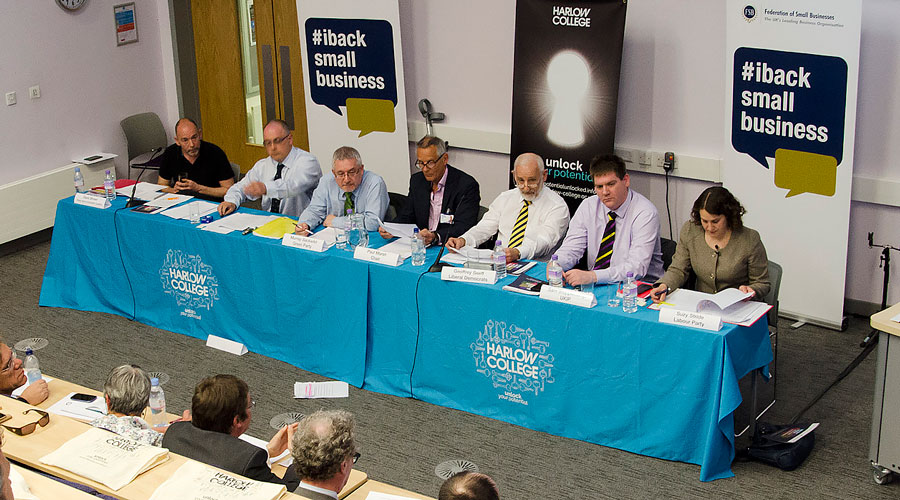 The first event, on 15 April, organised by Harlow & District Chamber of Commerce, included Robert Halfon from the Conservative Party, Labour’s Suzy Stride, Liberal Democrat Geoffrey Seeff, Murray Sackwild from the Green Party, UKIP’s Sam Stopplecamp and Dave Brown from the Trade Union & Socialist Coalition party and was an opportunity for local business to put some searching questions to the panel. These included reducing red tape in politics, improving broadband for local businesses and issues around the outsourcing of public services.

Robert Halfon spoke passionately about his affinity for Harlow and his party’s progress in employment and business growth.

Suzy Stride talked about safeguarding the NHS and protecting the education budget.

Geoffrey Seeff gave an insight into the working of a coalition government and tackled enthusiastically the question of red tape in politics.

Murray Sackwild stated his opposition to academy schools, Ofsted inspections and tuition fees and focused on his party’s commitment to anti-austerity measures.

Sam Stopplecamp spoke of his party’s desire to leave the European Union and that UKIP were the party of “common sense”.

Dave Brown talked of tackling the problem of big companies being “tax avoiders” and called for the protection of voluntary services.

The second event, held two days later, was an opportunity for Harlow College students to have their say in the political debate. There was the same line up of candidates, with the exception of TUSC’s Dave Brown, who was replaced by Eddy Butler from the English Democrats party.

If the panel thought they were in for an easier time after the previous debate that idea quickly evaporated with the first round of questions including housing, education cuts, the “bedroom tax” and tuition fees.